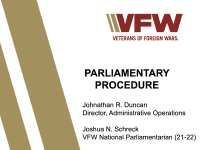 Formed and chartered in 2015, the “new generation” VFW New Haven of predominantly Post-9/11 veterans does not have a permanent post home; however, it is already the largest VSO in Connecticut’s third biggest city and achieved All-American status in 2017 and 2021. VFW New Haven is in the Second District in the Department of Connecticut of the national Veterans of Foreign Wars organization.